And Just Like That Is Confronting Facelifts and Aging 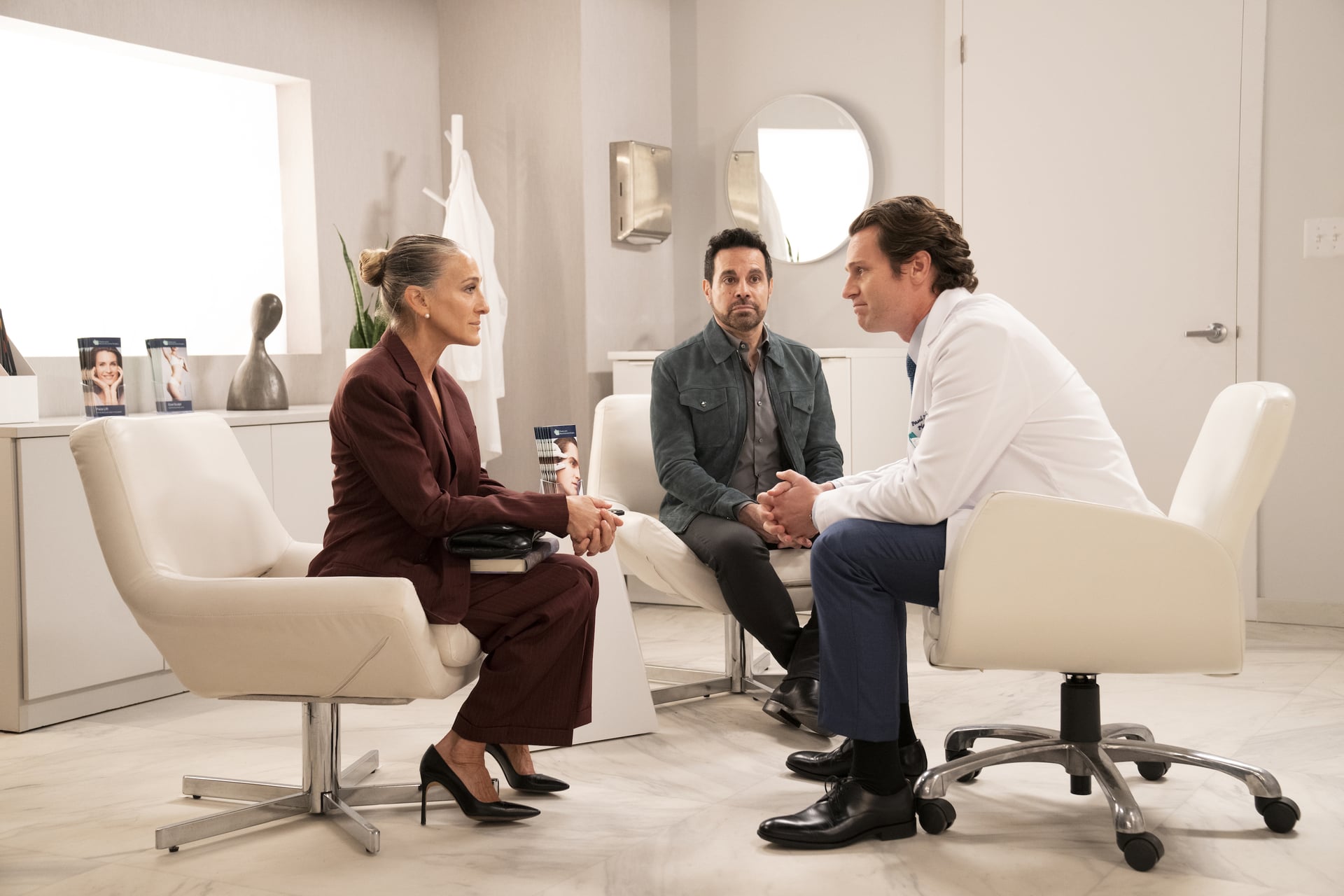 Aging has been a big theme on And Just Like That. In the first episode, Carrie Bradshaw and her friends Charlotte York and Miranda Hobbes discuss gray hair and the decision to color or not to color. In the most recent episode of the HBO Max series, Carrie considers if she should get a facelift, a popular plastic surgery procedure that, for the most part, flies under the radar in terms of mainstream TV topics.

At the beginning of “Diwali,” the sixth episode of AJLT, Carrie is embracing her new life after Mr. Big’s death. She starts off joyful and confident after attending her new friend and realtor Seema Patel‘s Diwali party. Then, abruptly, she’s at an appointment with a plastic surgeon, forced to confront her aging face against her will. Anthony Marentino, who originally scheduled the consultation with a plastic surgeon, convinces her to attend after Stanford bails on him. (For those who aren’t caught up, Stanford’s storyline sees him filing for divorce from Anthony, and therefore, no longer able to attend the “his and his” appointment Anthony booked.) After begging Carrie to join him, she reluctantly attends.

It’s a jarring shift to go from the party to the doctor’s office, and clearly, Carrie feels it too. Right away, she’s mistaken for the would-be patient. “So, what are we doing today?” Dr. Paul David asks Carrie, even though Anthony is sitting right next to her. Strike one! But wait, there’s more. The doctor then assesses Anthony and says he doesn’t need any work. “Nice Italian skin, good muscle tone,” he compliments Anthony before concluding, “You’re hot.” All he needs? Perhaps a little Botox.

By then, Carrie is “curious” to see where she stands. She’s there, after all. Ready strike two? “You look a little tired,” the doctor admits, and then starts selling our unwitting heroine on a little “refresh.” To be fair, he does tell Carrie what she does is completely up to her and says she looks beautiful. He also speaks a lot of truth when he says, “Unfortunately, Mother Nature and Instagram are much harder on women.” Ultimately, he shows Carrie a simulation of what she would look like after the “refresh” and again, stresses the decision is hers to make. “Oh, I remember her,” is Carrie’s response to the simulated results of what Dr. David’s surgical intervention would yield.

Carrie then seeks the counsel of her best friends, admitting she felt pretty good about herself before the consultation. Miranda is of the mind that society makes it wrong for women to age, while Charlotte declares that getting a little Botox to feel good is a woman’s prerogative. This is what the show got right about the topic of facelifts and getting work done, in general. The bottom line is, we all feel differently about aging, and how we deal with the inevitable is up to us.

I appreciate how all sides of the issue are presented on AJLT. The show acknowledges how hard it is for women to age versus men. Older men are often seen as distinguished with their gray hair and weathered skin, while women are just expected to remain ageless forever. Here’s where I acknowledge my age: 42 — OK, I’m almost 43. And like Carrie, I look in the mirror and see those 11s between my brow that weren’t there just years ago. I also wonder if, at some point, I will want to try Botox (or more). I see my eyelids drooping ever so slightly and ponder the interventions available to me, like a little “refresh.” Also like Carrie, I have some friends who never miss a Botox session (even during the pandemic) and others who would rather let nature take its course for the time being.

Ultimately, seeing women on TV talking about aging faces feels really good. Knowing the Sex and the City stars I grew up idolizing are facing these topics is as comforting as watching Carrie walk up to her old front stoop. I didn’t want to see these women just prancing around in great clothes in this reboot — I needed them to be as real about life as older women as they were about being 30-something-year-olds looking for love. Specifically, the talk around facelifts on And Just Like That is relatable for anyone who feels pressure to look young, no matter if surgical intervention is right for them or not.

As for me, I’m in the same boat as Carrie. Would I love to erase a few years off of my face? Yes, I get why she’s tempted. But I’m not rushing to go under the knife. Seeing Carrie (or more accurately, Sarah Jessica Parker) looking confident in her 50s without the facelift makes the aging process seem a little less scary — and for now, that feels like enough.

Best Hair Colors for Dark Skin, According to Experts

Finding the perfect hair color for darker skin tones is easy with the help of an expert. Shades of brown,...

Image Source: Mono Reducing individual waste is something many of us are continually striving for. Thanks to innovations like reusable...

Blush is kind of my thing. I'm fully ashamed to admit the amount of blush products I own (it takes...

Good news for anyone who wants to establish a skin-care routine with fewer controversial ingredients without derailing their budget this...

The History of Dark & Lovely, the Go-To For Black Women

When I was younger, between the ages of 10 and 16, I would regularly see my hairstylist for a relaxer,...